We arrived in Saint Petersburg in the evening, after a zippy four hour trip, and walked over to our fantastic hotel. It was immediately clear that Saint Petersburg had a very different vibe to Moscow. Although parts of Moscow felt much more European than we expected, it still had a very visible Soviet presence. We saw almost none of that in Saint Petersburg. No doubt as you get further away from the old centre things modernise, but just about every pocket of the city that we went to felt like it hadn’t changed since the revolution. And it’s beautiful! Like Venice but without the grittiness and tourists. Still, clearly the food has changed – we spent our first evening at a restaurant that served only hotdogs and champagne (presumably not a Soviet era staple). We had both hotdogs and champagne, with a side of fantastic sweet potato fries, and then ended our evening with an excellent night cap at the rather austere Orthodox.

On our first morning in the city we started with a great breakfast at Bonce. Dan had a proper English breakfast, I had oatmeal (which was served with a spoonful of melted butter on top) and we shared some more fried curd cheesecakes (sirniki). I think these were my favourite yet. They were so delicate and came with a delicious berry and cherry sauce. The coffee was also great. After breakfast we walked and walked along Saint Petersburg’s very charming canals, past the Church of Savior on the Spilled Blood, St Isaac’s Cathedral (where we had planned to go up to the colonnade but it was closed for the duration of our visit), and Kazan Cathedral.

Mid-afternoon we hopped on the subway and made our way to the State Museum of Political History of Russia. The Museum was excellent. We spent hours here and left only when we were very much in need of sustenance and a chair. The museum carefully described the gradual and then very hasty demise of the Romanovs and life in Soviet Russia (things came to a hard stop at Putin). It was interesting to get a glimpse of how Russians view the last 100 years or so of their history and I was particularly surprised by how critical of Stalin the museum’s commentary was (though perhaps I wouldn’t have been if I knew more about modern Russian history).

From the museum we walked through the very trendy Petrogradsky where we had an extremely late lunch / early dinner at an Italian restaurant (aptly named Italy). Is there anything better than a big bowl of pasta to lift spirits? I don’t think so. Somewhat refreshed, we made our way back to our cute hotel room to rest for a few hours before a late dinner nearby at Pelmenya, an inexpensive dumpling place packed with Russian speakers. We tried an interesting beer and a Georgian wine and dove into a variety of dumplings. They were good but (never thought I’d write these words) not as good as Yekaterinburg!

On Thursday morning we started our day by getting completely saturated in a rain shower on our way to breakfast. We pressed on, thinking it would be just a brief shower (it wasn’t in the forecast!), and it just poured and poured. By the time we arrived at Coffee 22 we were soaked through. Despite our sogginess (and probably to the dismay of the cafe staff), we sat down to breakfast (and dried out relatively quickly in the warm cafe). Dan tried another interpretation of smoked salmon and zucchini pancakes and I had a Spanish tortilla and salad (excellent). For breakfast dessert we shared more sirniki or Russian fried cheese cakes (this time with some lemon in them and served with jam and honey).

From breakfast we went to do some shopping in the hip area around Kazan Cathedral and then we walked over the Palace Bridge to the Peter and Paul Fortress. We walked around the walls of the fortress and then headed into the Peter and Paul Cathedral. I’d been curious about the church after seeing the tall spire from a distance (still the tallest structure in Saint Petersburg and also the oldest landmark) but didn’t realise until going in that it was the burial place for Russian royalty starting with Peter the Great (even the Romanovs have since been buried there after their bodies were discovered). What was more surprising to me was the fact that the tombs were above the ground scattered around the interior of the church. No doubt the result of my heathen tendencies, but Russian churches are confounding to me. Apparently services are still held there – something I cannot imagine given the presence of the tombs.

We ate lunch at a nearby restaurant called Koryushka where we decided once and for all that herring is definitely not as delicious as mackerel or anchovies and that Georgian food is too cheesy. We did however enjoy the view across to the Hermitage Museum and the Winter Palace and the other diners were good fun. It was obviously a business restaurant and we sat opposite a table of men who lived up to Russian vodka drinking stereotypes. They offered to buy us a round of shots but we declined (I think we’d need to spend some more time in Russia to truly appreciate the value of a mid-week lunch time vodka shot).

We took a long walk home via Bonce (to pick up some of their honey cake – delicious!) to chill out and get ready for our evening plans. On Thursday night we went to see Cinderella at the Marinksy Theatre (Dan’s first time going to the ballet!). The theatre itself was incredibly beautiful and the ballet was enjoyable, although I do prefer the more athletic and modern style of the New York City Ballet. Cinderella was a bit naff! They’re obviously trying to bring ballet into the digital age as they used a combination of traditional sets and projections but it was all pretty out of date so it ended up looking very 1990s clip art. After the ballet we wanted something quick and close by to eat so we ended up at an Irish pub called Molly Shelter. The food was fine (the hot chips were amazing) and the negroni was good too (impressively good given that we were in an Irish pub in Russia).

On our last morning in the city we started slow with lots of donuts from Пышечная (Pyshechnaya), a St Petersburg institution and their veeeeeery sweet coffee. The donuts were good, and such a bargain at only 20 cents each, but we later discovered that they are much better fresh from the fryer (we went back for a second round which we inhaled in the cafe). We combined old and new Russia, pairing our cheap donuts with third wave coffee from Skuratov (certainly much more expensive but so worth it in comparison to the sweetened instant coffee from the donut shop).

On Friday afternoon we headed to the Hermitage. As to be expected, the crowds of people were huge, although we climbed to the top of the Winter Palace and enjoyed going through the much quieter collections of Iranian and Turkish art, ceramics and textiles. Having housed Russian royalty for so long, I was hoping that the museum would include a lot more social history than it did. Even with an audio guide, many of the exhibits went unexplained and there was certainly no context.  The Hermitage collection is contained in five buildings (the Winter Palace is the main and most famous). We couldn’t get to all of them so after a couple of hours in the Winter Palace we opted to head to the General Staff building, which houses the Hermitage’s modern art collection. I’m so glad that we came here. The collection was interesting and the building itself was beautiful and light.

On our last night in Moscow we had dinner at Mayak, a typical Soviet style bar (so the patrons told us). The staff spoke no English but warmly recruited some young guests to help us. They pointed us to their favourite meals and told us which vodkas to order. The food was acceptable (the herrings in particular were nice) and incredibly cheap and we loved soaking up the vibe. It was a very cosy and suitably Russian end to our Trans-Siberian experience. 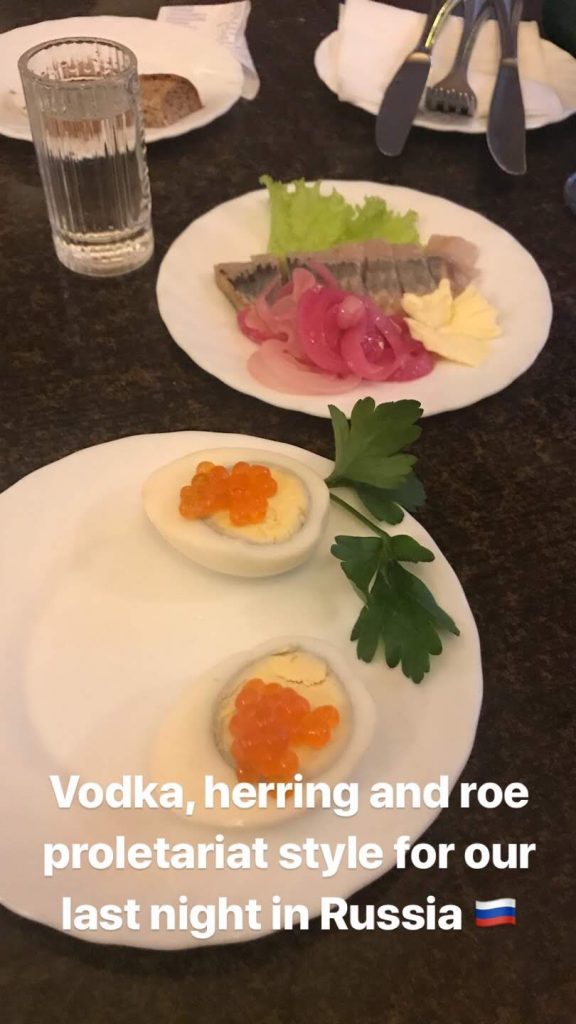